Google's initial announcement and change to PPC ads in March 2016 removed the right rail of ads from search engine results and increased the amount of ads in the top position to 4. We saw an increase in cost as more people competed for the top 4 positions of search engine results.
Another announcement was made during the Google Performance Summit In June 2016. It was announced that PPC ads will increase in size.  Here is how the PPC ads will change later this year: 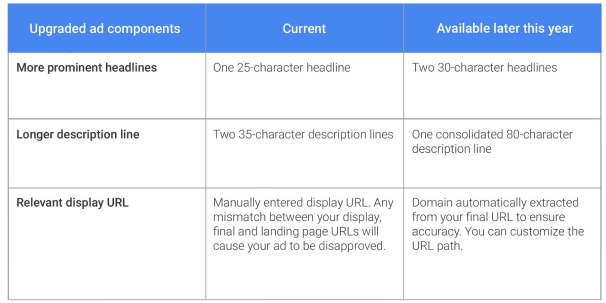 Does this affect all devices?
For now we anticipate that the extended ads will be for desktop only. Mobile ads already have a different ad type as advertisers are already able to customize mobile PPC ads to mobile devices.

Tablet Modifier TBD
It is also worth mentioning that Google will be allowing marketers to make bid changes to tablet devices. In the past advertisers had to lump in tablet bids with desktop bids. Now advertisers will have the freedom to pick a percentage of the primary desktop bid and increase or decrease bids on both Mobile and Tablet.
Figure 2: Mobile and Tablet Modifier

Bing Ads to Follow Suit
It was announced last week that Bing Ads will support the new Google extended Ads. Here is what the Bing PPC interface will look like with extended ads:

Posted by Alan Rothstein at 11:09 AM No comments: