A large portion of my Search Marketing knowledge is credited to YouTube, especially Matt Cutts' whiteboard sessions. It has been an easy way to learn about many Search Marketing topics direct from the experts in the industry. YouTube is also a great opportunity for you to educate your customers on your products and services.

Many people are surprised to learn that YouTube is the second-largest search engine. YouTube gets more search volume than Bing. Plus, YouTube is still a place people go to learn about different topics. With universal search Google includes much of the YouTube video content in search results. So how do you get to the top of your respective topic on YouTube? 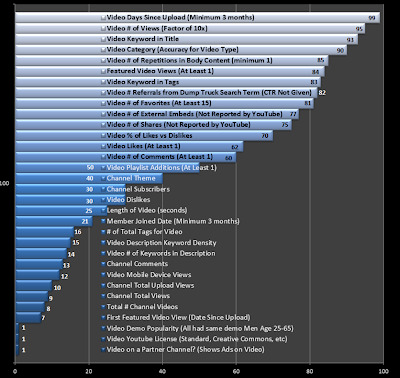 1) YouTube's Individual Video Ranking Algorithm exposed
The Holy Grail of search marketers is the algorithm. Figuring out or learning more about the alogorithm than your competitors  is the key to top rankings in organic search results. We have found these 32 variables have the biggest influence on YouTube individual video rankings. The variables are ranked on a Factor of 100, 100 being the highest or the highest correlated variable to achieving top YouTube rankings.

2) Channel Creation
Creating a channel is the first step to promoting your videos but this step shouldn't be taken lightly. The YouTube Channel is your homepage and channels get top placement in YouTube search results. Make sure you use a theme not only relevant to all of your videos but a theme that you want to rank on. Only focus on one channel, rather than creating multiple channels for different themes. Total video channel views allows a channel more relevant for increased search results.

3) Buy an Established YouTube Channel
When uploading a new video to a brand new channel, the videos will need some history on the channel before capturing top rankings. However, buying an established channel with its established history and fan base (subscribers) is a quick tactic to increase visibility. Remember that a new video must have at least three months of history before it can attain top rankings in YouTube search results. Note that if you are a YouTube sponsored channel, the guidelines say you can't sell your channel.

4) Playlist Creation
Creating a playlist of multiple videos on the same topic can be a good way to present your videos to your viewers. Always make sure your video is located in the first position to increase engagement and views of your videos. Ending playlists with video content that provides information about your products and services will provide an opportunity to talk to potential customers early on in the buying cycle.

5) Video Replies
Another way to signal YouTube about the theme of your content is to post a “video reply” to other related videos. Like a blog comment, a video reply offers a response to the primary video. Unlike a blog comment, the video reply contains a full version of your video for the viewer to watch. Video replies give YouTube context as to what your video is about, and helps to get increased traffic. To do this, search YouTube for the exact keyword you want to rank on. Click on each video that comes up and post your new video as a “video reply” to the most relevant videos. Click on "ad comment" and choose "Create a video response." 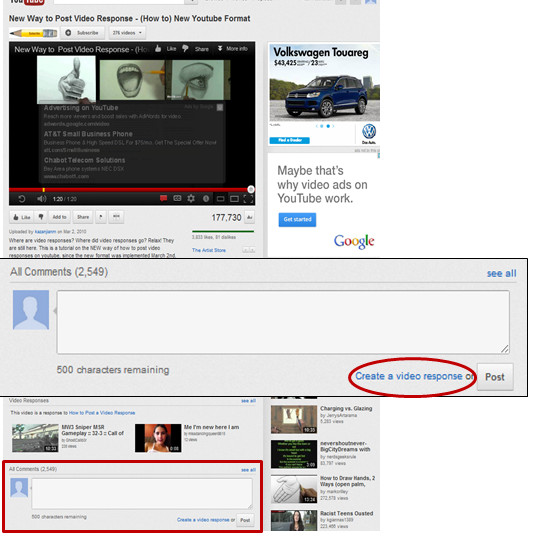 6) SEO Keyword Optimization
Titles & Descriptions - Like traditional SEO, the Title of the video is a major element that influences search rankings on YouTube. Unlike traditional SEO, the Description "does" hold some influence on search rankings so optimize your video description with the keywords you want to rank on.
Video Naming - File names are an often overlooked task. In my experience I’ve seen a lot of big brands upload videos with some variation of the following naming convention: “video1”. Generic naming conventions provide little indication about the content and in fact, can actually be more of a deterrent to achieving higher rankings. Google’s algorithm is like Hansel and Gretel, the more breadcrumbs/clues about the nature of your content, the more confidence Google will have in showing your content. Increasing the keyword density of the naming convention
Video Tags - Like social bookmarking and blogging, video tags are important and influence the search rankings on YouTube. Choose the 10 most relevant tags for each video to help it rank in search on YouTube. Never repeat the same tag twice on the same video.

According to Mashable, "Next, start building links back to your video. The more websites that link back to your video on YouTube, the more relevant that video will appear in searches. The best way to do this is simply to find out who is linking back to the most popular videos in your category, searching for that URL in Google to see where it appears, and then reaching out to these sites to ask them to link to your videos."

9) Keep the Channel Fresh
Like a blog, channel subscribers like to see new videos on a regular interval. By updating the channel with videos you will also keep your channel fresh. Freshness is important for rankings in YouTube. If you upload a bunch of videos to a channel and never touch it for years, then those videos may not have as much value as the videos in the channel which are updated regularly.

Did you just upload image ads to your Google Adwords account? Most reviews take 3 to 5 days from upload but sometimes the Google image ad review team gets backed up. If your ads have been under review for more than 3 business days you can contact Google directly and ask for an expedited image ad review.

Expedite Image Ad Reviews for Google Adwords
If your ads have been under review for more than 3 business days, you can send your ad review request to the Google ad review team directly via this link: http://adwords.google.com/support/aw/bin/request.py?contact_type=approval_request

Enter the following information and get a response within 1 business day:
- First Name
- Last Name
- Contact Email
- Telephone Number (optional)
- Adwords Login Email
- Adwords MMC Login (if applicable)
- AdWords customer/child account ID
- Attach a screenshot of the page where you see an error message or encounter a problem (optional)
- Ad Group Names
- Campaign Name (Enter request for one campaign at a time, even though you can enter multiple campaign names)

Over-Write Old Ad or Create New Ad?
Google also says, "When you submit new ads or make changes to existing ads, they're automatically submitted for review. We work to review all ads in our program as quickly as possible, usually within 3 business days. While some ads can run on Google before they're reviewed, no ad will run on our search partners or Display Network until after they've been reviewed and approved. To avoid an interruption to your ad delivery in the future, consider creating a new ad rather than editing an existing ad. This process will help ensure that one ad keeps running while your new ad is under review. Once the new ad is approved, you can delete the old ad."

Ad Preview and Diagnosis tool to see how these ads appear on Google.
Posted by Alan Rothstein at 10:42 AM No comments: 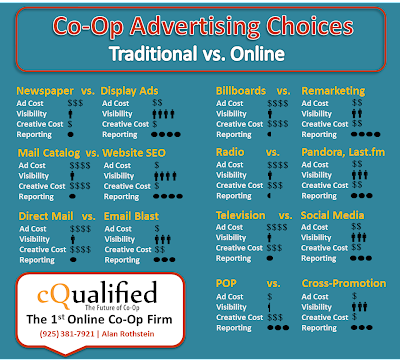 Considering which Co-Op verticals you are interested in spending your free advertising on? Online programs cost less, are easier to track and produce more visibility.
Posted by Alan Rothstein at 1:33 PM 2 comments: 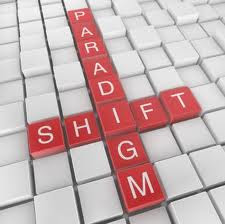 With over $50 Billion in Co-Op funds distributed annually, Co-Op is big business for manufacturers and their online resellers.

The current Co-Op verticals include:

Newspaper & Magazine - Buying a newspaper ad in the Los Angeles Times will run you about $70,000 for a full-run, full-page black-and-white ad. Advertising in local newspapers and magazines can run $1,000 to $5,000.

Catalogs & Direct Mail - The cost of planning, producing, printing & mailing can be expensive.

Outdoor Billboards - The cost of billboard advertising ranges from about $700 to $2,500 a month. Not including the cost of creating the graphic and installation.

Radio - It is recommended that you set aside a minimum of $6,000 for radio.

Television - A 30-second time slot in a medium-sized market can be purchased for as little as $5 per 1,000 viewers, you could expect to pay less than $100 per commercial slot. However consider that frequency is very important for television to be fully digested by customers. You should plan on 1 tv ad per hour, per channel for a minimum of 2 weeks (the same with radio).

Point of Purchase - Of all the traditional Co-Op verticals, Point of Purchase (POP) can be the least amount of cost for the most amount of value. The major expense for POP is a need to update graphics and promotions, causing new printing of POP materials as often as every month. Through in the cost of a designer and you have an expensive and time sensitive advertisement.

Online Co-Op verticals are much less expensive, more targeted, easier to monitor and manage. This is why some manufacturers are making online Co-Op spend mandatory. Intel, for example, mandates a minimum of 35% of Co-Op funds to be used for online verticals.

A shift in Co-Op is happening and cQualified is on the fourfront. Join us in shaping the future of online retail.
Posted by Alan Rothstein at 12:23 PM No comments: