Internet and a Movie: 2009 a Retrospect

2009 was hardly the year of the Internet but some movies continued the theme that swept the world in 1994, busted in 2000, and slowly became something each and every American couldn't live without.

Furthering the status of online journalism as posed by Russell Crowe and Rachel McAdams in "State of Play," in early 2009, are two American journalists Laura Ling and Euna Lee. Ling and Lee were detained by North Korean soldiers near the country's border with China, in March 2009. Inadvertently bringing credibility to the title "online journalist." State of Play was the first movie I can remember that legitimized online journalism while at the same time illustrating how archaic Newspapers really are. 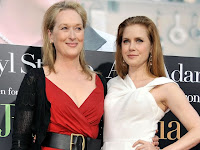 Julie & Julia: Out with the Old, and In with the New

The 2009 blog hit, Julie & Julia, promoted bloggers to the status of Internet Celebrities continuing the phenomanon that built billions of blogs (thanks to Meryl Streep and Amy Adams). Blogs are still a staple in the world of Internet news. A trend that took early 2009 was hyper-local blogging coined by search marketings own Matt McGee. Hyper-Local Blogging has caught on like wildfire with Newspaper Conglomerates that are losing readers by the second to online news sources. Maybe Hearst and Knight Ridder can stop the newspaper ship from capsizing (like the Titanic)?

Adam Sandler and Seth Rogen put a smile back on your face when you think about MySpace. The fledgling online music destination, owned by Fox Interactive, is resurrected, if only for a moment, against its online rival Facebook. "F*** Facebook, In the Face!" as Seth Rogen says on stage to a crowd of MySpace employees. MySpace changes guard with a new CEO, Owen Van Natta of Facebook fame, in an effort to once again rain supreme in a battle of Iron Chef's (off on a tangent, sorry!). Funny People gets two funny thumbs way up, MySpace not so much.

Paranormal Activity: Ouija would be Proud

Paranormal Activity is the best use of the Internet to promote a movie virally. Blair Witch Project, I mean, Paranormal Activity is another in the "is it real or is it fake" independent movies, shot by a camcorder (or a new iPhone 3GS?). With a gross revenue of $1 million (making Mr. Evil proud) and a production cost of $15,000, and a Ouija Board for $19.99, this makes the list of the top 10 most scarily profitable movies (mou..ha..ha).
Posted by Alan Rothstein at 6:35 PM